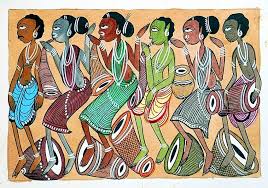 The Bengal presidency developed the Kalighat paintings in the nineteenth century. The patuas, or traveling scroll painters, had been practicing Pattachitra folk art. The country artists who had relocated to Calcutta absorbed the new manners and customs of the British immigrants, the revivalist exercises of the Mughal and theatres, as well as the use of Sanskrit on stage, and turned it into a popular urban genre. The age of mechanical reproduction in the form of woodcut, lithography, oleography, and printing overlaps with the time of Kalighat paintings.

These advances had resulted in widespread images consumption in metropolitan areas, and Kalighat was a response to this. After interacting with colonial art, the Kalighat painters began to use watercolors, shaded figures, and folio-sized mill-made papers. They assimilated the importance of western stage performances and Indian artwork schools in developing the distinct artistic characteristics of Kalighat paintings as we know them now.

The Kalighat Paintings’ Characteristic Features- The Indian Artwork To Cherish

Paintings in the Bazar Style

One of the most unusual aspects of the Kalighat paintings is that they were created in a bazaar. The gods were depicted in the same way as the average middle-class man of the time. In the streets of Calcutta, they can be seen dressed in ordinary clothes and wearing ordinary jewelry. The painting ‘Shiva’s outing with the family is the best example of this interpretation. Shiva is depicted as a loving father holding his son Ganesha in his arms in this picture. His wife, Parvati, stands beside him, dressed like a regular Bengali lady. Parvati is pacifying Shiva by clapping her hands, while Shiva is trying to entertain his kid by playing his damru.

The artists generally depicted the environment in which they worked. Fish became a recurring and common element in the artworks as a result of their food habits. The cat was also an important part of the Kalighat paintings. Cat with a Fish paintings illustrates religious hypocrisy, with the cat serving as a sarcastic depiction of the false aesthetic. Religious characters like Durga, epic tales, and other sacred texts were also painted by the artists. Many paintings made comments about priests, maybe illustrating the social practices of the time. Babus with Albert-style hair, wearing fancy shawls and buckled shoes, smoking hookahs, and sitting on Victorian chairs were all typical depictions. Landlords, with their opulent dinner parties and sensual delights, were also depicted frequently. The well-known Tarakeshwar tale demonstrates how material culture was infiltrating people’s everyday lives.

Between 1854 and 1871, the large city of Calcutta was connected to the national highway network, and Kalighat paintings flourished. There was a surge of pilgrims, tourists, and traders looking for gifts to take home. During this time, the Kalighat painting achieved its pinnacle.

The Kalighat paintings are significant because of their ability to create a volume using lines. Jamini Roy, a world-renowned artist, was later inspired by this. From the beginning, the Kalighat paintings were a common man’s art form. It continued to absorb societal changes, ensuring that the art form never became stagnant. The paintings continue to depict societal issues, as well as secular and non-secular themes.

There are various kinds of art sketches too available with the different online art galleries such as Indian Art Ideas.

<strong>Whirlpool Refrigerator buying guide: How to choose a Right Fridge for your Kitchen</strong>

Author TechtimePosted on February 17, 2021February 17, 2021
Bed bugs are nasty parasites that feed on the blood of humans. They are difficult to find and their infestation can be easily spread,...
Read More

Author TechtimePosted on April 20, 2020December 8, 2021
Have you ever thought of an affordable home security system to watch over your home 24/7? It is always the best feeling when you...
Read More

7 Trouble-Free Ways to Allergy-Proof Your Home

Author TechtimePosted on August 12, 2020March 5, 2021
Having allergies can be inconvenient. Sometimes, it can disrupt you from enjoying the best things in life. Since it’s quite common for a person...
Read More

Author TechtimePosted on February 23, 2021April 30, 2022
Home improvement is a matter that requires a particularly careful approach, because the correct choice of contractor depends on the quality of work performed...
Read More