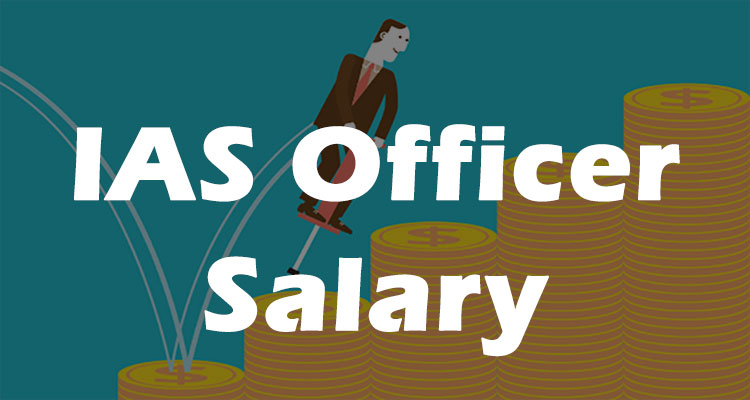 Union Public Service Commission (UPSC) conducts the Civil Services Examination (CSE) annually. Through CSE exam, candidates are recruited in Indian Administrative Services (IAS), Indian Police Service (IPS), Indian Foreign Service (IFS), Indian Revenue Service (IRS), etc. Lakhs of candidates aspire to become IAS officers. All the aspirants who start their journey of UPSC preparation are often excited about IAS Salary, perks and benefits related to these services. The excitement is justified as IAS is an All-India service which offers immense opportunities for an officer in every realm of the society.

What is IAS Salary?

Candidates should know that now an officer derives his/her salary decided on the 7th Pay Commission recommendation. The lowest grade IAS Salary pay in the IAS is 16,500 INR following which an officers’ salary pay scale ranges from 56100-132000 INR. The grade pay in the service increases with the years of experience in the field. The first promotional grade pay of an officer is of 20000. Candidates should also know that the highest salary in IAS is given to the IAS officer of the rank of Cabinet Secretary. Also, the post of Cabinet Secretary is the highest post an IAS officer can get. The salary of the Cabinet Secretary is 250000 INR.

To understand the salary distribution, candidates should know the different posts that he/she can achieve with years of experience. There are posts broadly divided under the district administration, state secretariat, and central secretariat. The following points are to be noted:

Posts under District Administration are:

Posts under State Secretariat are:

Posts under Central Secretariat are:

The salary and perks look lucrative for the aspirants but the basic requirement to reach there is hard work from scratch. It is a tough competition between lakhs of aspirants to get into IAS, hence each aspirant should think out of the box to defeat their competitors. To begin with, aspirants should know the syllabus of the exam and UPSC Exam pattern. A diligent preparation will make it easier for you to get into these services.

When all these points are well noted by the aspirants, it will come as a motivation to them. Right from the IAS salary to other perks and benefits motivate the candidates. Hence, it is important that the candidate knows everything about the exam.

This year, Prelims is going to take place on 4th October 2020 while Mains will start from 8th January 2021. Aspirants should buckle up as the exam approaches and they should up their ante for the same.

Are Affordable Cigars Really A Thing

Importance of Textbooks for Students

Author TechtimePosted on December 12, 2020May 7, 2021
NCERT, which stands for National Council of Education Research and Training, has made a unique name in the field of education, becoming the best...
Read More

Why You Should Introduce Game-Based Learning At School

Author TechtimePosted on August 31, 2020August 31, 2020
Gaming is an elementary learning technique for the most youthful ages, so gaming should assume as important in teaching programs. In the digital world,...
Read More

Do you know that glasses are available to try at home?

Author TechtimePosted on June 10, 2020June 11, 2020
Earlier, people are under the impression that buying prescription glasses online could be a risky business if they do not try at home glasses....
Read More

Fitness Health
Author alltechtimePosted on June 29, 2022June 29, 2022
The pandemic has changed so much about how we live, work and play. It has also changed our perception of the healthcare industry, which...
Read More
Marketing
Author stevejhones7867Posted on June 25, 2022June 25, 2022
TikTok has been become more popular one of the best platform which helps to showcase your abilities and talents. It is that Tiktokers Content...
Read More

Food
Author TechtimePosted on June 22, 2022June 22, 2022
Online cake delivery in Chennai The cake is an integral part of every celebration and occasion. It is a form of sweet and delectable...
Read More